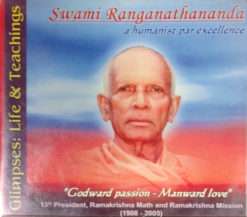 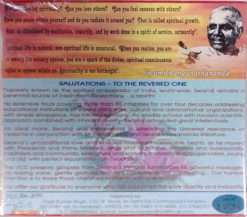 Popularly known as the spiritual ambassador of India, world-wide, Swamiji remains a perennial source of inspiration! Gave many – a rebirth!

An ideal monk, Swamiji was instrumental in spreading the Universal relevance of Vedanta in conjunction with Sri Ramakrishna and Swami Vivekananda literature.

Swamiji’s unconditional love and kindness touched innumerable hearts; as he moved with Presidents and Prime Minister, kings and dignitaries, ministers and bureaucrats capitalists and communists, executives and workers, monastic and householders, young and old; with perfect equanimity – an avadhuta.

This VCD presents glimpses from Swamiji’s life and summarizes his powerful messages. his roaring voice, gentle gestures and rare movements are captivating.